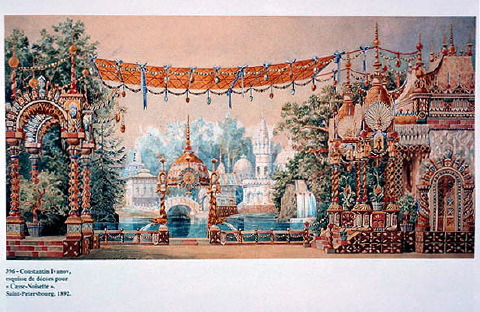 Konstantin Ivanov's original sketch for the set of The Nutcracker (1892).[/caption]

First graders in the Hilliard City Schools study the life and works of Pyotr Ilyich Tchaikovsky. Additionally, the students love the music of The Nutcracker so much, we look forward to studying it each year with all grades around the winter holidays. You can listen to some podcasts about Tchaikovsky and his Nutcracker ballet here. We listened to some of these podcast episodes in class. Be sure to click on the "Read About the Show" links to take the quizzes and test your knowledge. Here is the Amazon link to the picture book version of The Nutcracker that we read in some music classes.

The first two videos below are some great clips of professional dancers rehearsing portions of The Nutcracker ballet. You can get a really close look at the physical demands of ballet dancing as well as the ballerinas' use of their special pointe shoes. The four videos after those are some short selections from various ballet company performances of The Nutcracker.

BalletMet's production of The Nutcracker is excellent every year and is performed at the historic Ohio Theatre in downtown Columbus. If your family is interested, tickets can be purchased online here.

Second graders in the Hilliard City Schools study the life and works of Wolfgang Amadeus Mozart. Below are some links we used in music class.

Below are some scenes from two of Mozart's Operas, The Magic Flute and The Marriage of Figaro.

Here is Mozart's very famous Symphony No. 40 in G minor performed by the Boston Symphony Orchestra, conducted by Leonard Bernstein. The video below that is an interesting visual representation of the first movement of the same Symphony.

Third graders in the Hilliard City Schools study the life and works of Sergei Prokofiev. Below are some links we used in music class.

Check out this cool, up close and personal video of an orchestra rehearsing Peter and the Wolf.

We also compared two famous film versions of Peter and the Wolf, the 1946 Disney short and the 2006 Oscar winning short written and directed by Suzie Templeton. Because the Templeton film is a little dark and unrated, I sent information home to parents about it, allowing them to opt their child out if they felt it would be too scary. It was a lot of fun for the kids to see such contrasting interpretations of Prokofiev's music, and for me to pick their brains about why they preferred one version over the other. (In case you were wondering, the Templeton version was the runaway favorite.)